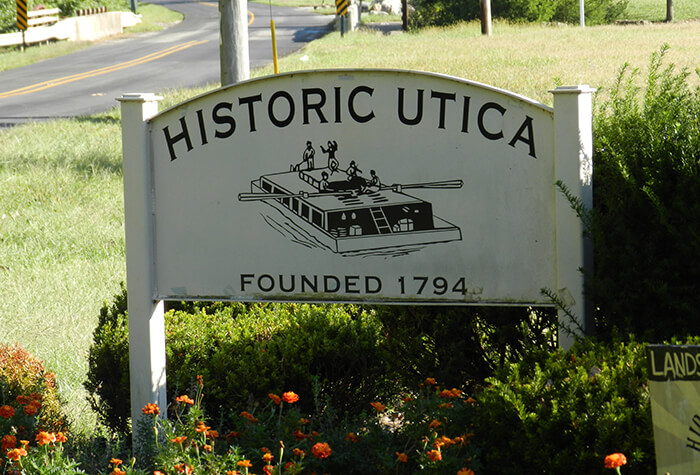 An old letter reveals the early history and pioneers of Utica, Indiana. The first Settlement was made in 1795. The center was laid out in 1816 and log houses were built.

A history of the town of Utica as written in 1817 by Samuel Morrison, the first teacher in the town and draftsman of the first map of Indiana, has been discovered in the valuable old papers belonging to Grover C. Lewis, Trustee of Utica Township, Clark County, Indiana.

The first settlement in Utica was made in 1795 opposite the mouth of Harrods Creek on the Kentucky side of the Ohio River by James Noble Wood, his wife, Margaret Smith Wood, and others.

The town of Utica was laid out by Judge John Miller, Judge Wood and Dr. Samuel Blight of Philadelphia, Pennsylvania, in 1816. A contract was let for $2,500 to build one hundred cabins of round logs and clapboard roofs to cost $25 each. Each lot was 100′ x 100′ square. There was room for a vegetable garden, fruit trees, grape vines and a shelter for a cow, hog and a horse. The ladies always found room for a flower garden grown from seeds, bulbs and cuttings from their previous home before coming to Utica.

In 1819 four families arrived from Philadelphia, Pennsylvania, on a flatboat that was used for a home until they could get into their new cabins. Rev. William Clark and his family of two sons and five daughters; John Lentz and his wife, Catherine Howk Lentz, with their five sons and three daughters; Abram Ashton with his wife and son; George Lentz and his wife; and Evan Thomas, a stone mason, composed the party of pioneer settlers. Samuel Starkweather was among the first to start in the mercantile business in Utica; IUs wife was Maria Lentz, the youngest daughter of John Lentz. His partner was Peter Coldrin. William Morrison Jillett, William Thornton and William Martin were among the early artisans. As early as 1823, Robert McGee had a blacksmith shop in Utica. John Lentz was the second merchant and built the first gristmill. Mr. and Mrs. John Lentz gave a plot of land to each church of Utica to build their houses of worship. Five lots were reserved in the center of town for a public square. Hillcrest Cemetery was reserved for a beautiful resting place for the earliest settlers and their families.

Other settlers were William Brendle, a painter; John Rider, a carpenter; Samuel McClintick, the first and only tavern keeper; James Morrow; Joseph Lane; Peter Bear; George B. Halt; William Morris; Peter Sigmond; and the Rev. Gulich. The Smiths were very early settlers before the others came to that area. One of the Smith boys was scalped by an Indian when he went to get the cows. The Smith farm northwest of Utica has an old colonial brick house and a family cemetery.

Crossings to Kentucky were made by a ferry boat, operated by Judge Wood and his wife, which discharged passengers at the mouth of Harrods Creek, Kentucky. Travelers were afraid of the Ohio Falls at Clarksville, Indiana.

Above Utica were the Hobson, Summers, Camplin and Spangier families. On Jenny Lynn Hill was a huge red brick mansion with spiral stairways and massive polished marble fireplaces. It was built by the early Spangler family that was related to John Alden.

Also mentioned were Emory Syvester; Aaron, John and Sihon Prather, the heirs of Basil Prather, a prominent Revolutionary soldier; the McCalleys; the Schwartz family; the Gilmores; the Jacobs; and the Redmons. Land was selling for $1.25 per acre at that time. Jeremiah Jacobs II, a Revolutionary War soldier, had a New Chapel meeting house built on his “Spring Castle Farm” on the New Chapel Road located on Deer Creek. The early pioneers were of the Methodist faith and finally built a New Chapel Methodist Church as early as 1801 before Indiana was a state. It is the oldest Methodist church in the state of Indiana in continuous service.

There also was a pioneer block house built of stone over a huge spring that the early settlers built to protect them from the Indians. It was on the Cornelieus Ruddell Farm and was called the New Chapel Block House. Opposite the block house was a beautiful white colonial home built by Henry Bottorff and his wife, Catherine Hikes Bottorff. It was sold to William Fletcher Robertson, from Maryland, and his family.

Isaac Coons had a huge tannery on his extensive farm near the Spangler place. They produced the finest leather in the country, due to the extensive growth of Hickory trees. The Hickory bark was used for tannic acid.

The white covered wagons were a familiar sight going out the Old Salem Road to the Great Northwest Territory of the new country of America. “Baird’s History of Clark County, Indiana” was written by a relative of Jonathan Baird, an outstanding pioneer.

The Robertsons, Tylers, Emmerkies and others made the lime stone industry very much desired due to the abundance of porous limestone found in the area. The old kilns are still to be seen across the township and the area along the river road east of Utica.
James M. Woods laid out the first orchard in Clark County in 1790. Samuel McClintick, a soldier in the battle of Tippecanoe, built the first brick house in Utica which he occupied until 1823. He sold it and moved to Polk County, Indiana, where he died in 1826. His wife was Nancy Wood, whom he married in 1815.

Judge Wood was the first tavern keeper; Jonathan Clark was the first man in the village to make store keeping a vocation. Samuel Stackworth was the first store keeper engaged in pork- packing. Abram Ashton established the first blacksmith shop at the corner of Fourth and Ash Streets. Robert McGee built a blacksmith shop in a log structure as early as 1823. In 1841, McGee sold out to William Tyler. Peter Mann of New York State had the Utica “Black Horse Tavern” in the east end of town. William Brindle had the “Travelers Home,” a place of good food, whiskey and dancing. Mr. Benjamin Taff (or Tapp) had a tavern on the corner of Ash and Second Street. They had a sign of crossed keys. The house was built of the best brick in Utica. Peter B. Dorsey also had a brick tavern. Ashton’s Mill above Utica in 1832 made whiskey, made flour, and sawed wood; and it was one of the most prosperous places in town.

Contributed by Ruth A. Magruder (from old newspaper clippings)
Descendant of the Sigmond family